We're well into the prime real estate selling season for much of the country, a marketplace less certain in many areas than in the past few years.

We don't fully know what will happen in 2007, but to date many markets have stalled if not declined. For most long-term owners selling in such a marketplace, appreciation from past years assures profitable sales, but perhaps not as profitable would have been the case in 2006.

But still, owners in all cases would like to maximize their profits. What to do? If you're a seller, there are 10 negotiating steps you can take to make sure your home has the best chance for a top price and a quick sale.

Step 1: Get a local broker. In a slow market there are relatively fewer buyers. It follows that to generate the most demand you want your property exposed to as many purchasers as possible. Who do buyers contact when they want a house? Brokers. Figures from the National Association of Realtors show that 85 percent off all buyers rely on real estate brokers when buying a home while 80 percent rely on the Internet. Who posts real estate information on the Internet? Local brokers.

Step 2: Read the sale agreement. Virtually all jurisdictions have a standardized real estate contract which over the years have become lengthy and complex. If you use one then you're automatically agreeing to all unmodified terms and conditions, so read the entire agreement so you know what is being said.

But is there something in the proposed agreement that should be changed, removed or added? Brokers should provide a copy of the sale agreement they expect to use at listing presentations and this document should be read to avoid surprises and misunderstandings. Since these are form agreements, anything not required by law can be changed with a suitable cross-out or addenda. For details, speak with your broker or attorney.

Step 3: Know the marketplace. In terms of negotiation it's not good enough to know recorded sale prices because they frequently don't tell the whole story. For instance, two homes may both have recorded sale prices of $500,000. One may actually have sold for $500,000 while the other sold for $500,000 but the owner gave a 3 percent seller credit to the buyer for a new roof and appliances -- that's $15,000 off the top. Local brokers who actually make sales know the innards of recent transactions are thus are in the best position to provide negotiating advice.

Step 4: Know your terms. You know your property will sell at some price point, but rather than a given price it's best to think of a home as a package of price and terms. For instance, in a slow market it may be better to pay a "seller contribution" to help buyers off-set closing costs than to lower the sale price. In many cases, the seller contribution may be smaller than a price reduction and much more attractive to buyers who need cash to close.

Step 5: Reduce deposit requirements. To make a contract work there's a need for a buyer deposit, the "consideration" necessary to bind a deal. If you're a seller you want the largest possible deposit, but in a slow market you may have to settle for less. Buyers, for their part, want to make the smallest possible deposit if only because a big deposit represents a huge psychological commitment -- and a financial one.

Less consideration may be appropriate if the buyer is pre-approved for a loan, the purchasers have a strong interest in the property and no better offer is in the picture.

Step 6: Throw in stuff. Do you really want to move a swing set or a washer/dryer? In some cases it may be best to "reluctantly" part with such items if only a buyer will make an offer.

Step 7: Update MLS photos. If it's August and your MLS photo shows a home with four feet of snow in the front yard then buyers can guess that the home has been for sale for a long, long time -- meaning the price and terms are, um, flexible. Perhaps more "flexible" than you would like. Have your broker post newer photos.

Step 9: Visit open houses. It's always good to visit open houses or, as they're otherwise called, the competition. It's not easy to be objective, but is there something other owners are offering which might work for your property? Something you can make into a bargaining point? Maybe an offer to re-paint the living room in a color of the buyer's choice is not a bad idea.

Step 10: Have context. It's silly to worry about small costs and concessions when your core goal is to sell the home.

In one situation, a buyer demanded an extra $500 to resolve some alleged concern just before closing. We thought this was simply an example of buyer's remorse and said yes, got an otherwise terrific price, and closed. Soon thereafter the local market slowed and prices softened. It was far cheaper to "lose" $500 then to locate another buyer a few weeks or months later when the market was harsher and our final sale price might have been many thousands of dollars less.

Would we have rather not paid the $500? Sure. But $500 was a small cost in the context of a rapidly changing market, one where delay could have meant a serious price reduction.
Posted by Jaime Ulmer at 3:23 PM No comments:

Check out this great article, written by my friend Suzanne Mayer (click the image below to read it): 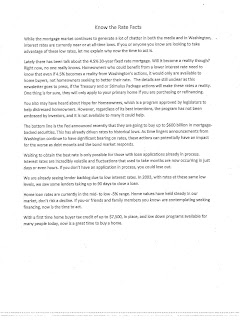 Posted by Jaime Ulmer at 3:12 PM No comments:

For Some, It's Finally Time to Dive Into Housing Market

For Some, It's Finally Time to Dive Into Housing Market

For years, even as her friends bought huge houses in the expensive Phoenix market, ElizabethChild remained a renter.But in January, the airline customer-service agent and her boyfriend closed on their first home.

"And now I do. It's so perfect."Elizabeth Child and William McGeary were able to buy their first home after prices in Phoenixdropped sharply.The housing bust is creating a new group of winners: first-time home buyers.

People who sat onthe sidelines -- often watching wistfully as their friends became homeowners -- are suddenly ina position to grab some great deals. Indeed, first-time home buyers made up 41% of all buyers atthe end of 2008, up from 36% in 2006, according to a recent survey from the National Associationof Realtors.

The new buyers are being lured in by home prices that are down about 25% from their peak levelsin mid-2006, according to the S&P/Case-Schiller Index. In some markets, prices have dropped evenfurther -- slumping around 40% in Phoenix, Miami and Las Vegas. Lower mortgage rates have alsohelped make real estate more affordable, and as houses languish on the market longer, morehomeowners are willing to negotiate.

With Congress considering plans to sweeten a tax credit forfirst-time home buyers, the picture could get even brighter.

"Buyers are now coming back into those hard-hit markets to take advantage," says Lawrence Yun,chief economist for the Realtors' association. "It's a buyer's market."Ululani and Scott Larson looked for a house in the Seattle area several years ago, but held offfrom buying, deterred by the high prices.

"I felt like we were missing out, because everyoneknows it's the American dream to buy a home and build equity," Mrs. Larson says.The couple was shocked to discover recently that they could afford a four-bedroom home inFederal Way, Wash.

The assessed value of the home in January was $400,000, Mrs. Larson says.Their offer of $315,000, with a down payment of $15,000 was quickly accepted by the relocationcompany, which had had the property on the market for six months.

"Honestly, I didn't think we'dget as nice of a house as we did," Mrs. Larson says.Of course, would-be buyers need decent credit scores and the money for a decent down payment.Also, finding the right property can be a challenge for first-time buyers, who tend to beseeking less-expensive homes.

The typical first-time buyer purchased a home costing $165,000last year, according to the National Association of Realtors. Yet some of the best bargainsright now are in luxury condos and sprawling single-family houses.

"The disproportionate McMansion inventory doesn't work," says Shari Olefson, a real-estatelawyer who works in southern Florida. "Even if you qualify for the loan, there are huge overheadcosts to buying a larger home."

Tim Epps, a mortgage adviser in Tulsa, Okla., runs rent-vs.-buying simulations forwould-be buyers and recommends that other prospective buyers do the same long-term calculations.Mr. Epps and many mortgage lenders recommend that buyers come up with as big a down payment aspossible, even though Federal Housing Administration loans will allow some first-time buyers toenter the market with as little as 3% down. (Hud.gov has more information about FHA loanprograms designed for first-time buyers.)

"Even if [a home owner] loses some paper equity, in the long run, there are some tax benefits,"says Mr. Epps, referring to the deduction for interest paid on mortgages and the credit forfirst-time home buyers.Elizabeth Child bought a home once listed at $340,000 for $220,500.

The $7,500 tax credit for first-time buyers, which Congress passed last year, has had littleeffect on the market so far. Because the credit has to be repaid, buyers are viewing it asanother loan, industry experts say.

But the stimulus package that Congress is working on islikely to repeal the provision that requires buyers to pay the credit back and possibly enlargethe tax credit as well.For many buyers, the biggest question is whether to hold out for even better conditions.Historically, recoveries in the housing market are slow, and most experts expect the prices tostay low for some time.

That means people can take their time shopping for the right property,real-estate experts say.John Stratton, an agricultural engineer in Lisle, Ill., was serious about buying last summer butheld off from making a bid.

Some of the money he planned to use for a down payment sufferedlosses from mutual-fund investments. He's also waiting for prices in his area to go downfurther. "I can do better investing in things other than real estate," he says. "Right now, I'mnot diving in."Patience can pay off. Jen and Drew Rocky spent over a year tracking their prey before the pricewas right.

In the summer of 2006, they saw the four-bedroom, 2½-bathroom home of their dreams inSherman, Conn. The asking price was $565,000, "completely out of our price range," Mrs. Rockysays.But they didn't give up.

The Rockys kept driving by the vacant house. They had online alerts tonotify them of changes in the property's listings. They went to town hall to research the home'spublic records. As they suspected, the home was in foreclosure.

"There were liens all over theplace," Mrs. Rocky says.They bought the home in December 2007 for $410,000. "I felt so vindicated," Mrs. Rocky says. "Wegot a good deal, but I'm sure there are even better deals out there."
Posted by Jaime Ulmer at 3:07 PM No comments: